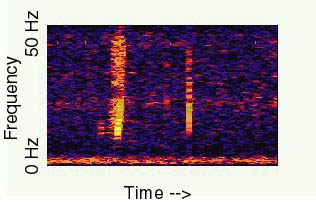 The Bloop is a mysterious noise picked up by the U.S. National Oceanic and Atmospheric Administration (NOAA) in 1997. The image above is what they recorded when the sound occured.

It was louder then the loudest known animal, the Blue Whale, and seems not to be man made but also doesn't match any sound made by animals. It has been brought forward that it could have been icebergs cracking or something like that but it's still not confirmed to have come from some geological source; many think it was some undiscovered animal that lives in deep water.

Another noise that makes scientists pause is the "Slow Down", a name given to a noise that slows down over a seven minute period. The sound was detected at 15°S 115°W﻿ and has been picked up several times each year since 1997. It is similar to the sound of friction, so this one has been postulated to be the noise of friction as ice passes over rock. (Image of the Slow Down below) 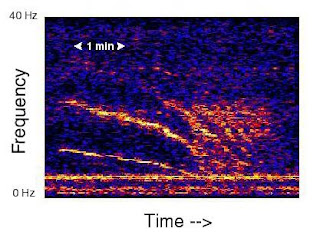 What these noises truly are is still the topic of debate the world over. But with more and more advances in technology, we may find the answers sooner rather then later.
Posted by Shara at 10:16 AM

Shara
Married artist that just enjoys completely random things and loves to talk about them with others. I am also a Pagan and Unicorn Otherkin, so if you don't know what it is Google it and if you don't like it you can keep your flames to yourself thank you very much.